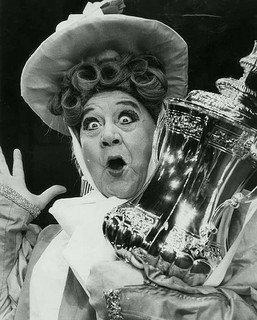 Everything we accomplish begins in our mind’s eye.  Don’t believe me?  Look at the thousands of dollars adults spend each year on books, seminars and coaching simply to learn how to use this important tool.  How many times have you heard a speaker or seminar leader advise you to attach a “vivid, emotional picture” to your goals in order to speed up the process?  It’s pretty common — and common sense — advice.

Visualize.  Picture.  Imagine.  Pretend.  Fake it ’til you make it.

What do these things have in common?  They come pretty naturally to kids.  I wonder what would happen if we took steps to reinforce  those abilities  in childhood   — while it’s still easy and natural?  And why do we want to preserve constructive imagination in our kids?

When did you first hear that old favorite W. Clement Stone quote, ‘What the mind can conceive it and believe it can achieve’?  As adults we learn that being able to picture the end result is an important step in creating motivation to act on our ‘wants.’  We picture ourselves fitting easily and effortlessly into a favorite outfit or skinny jeans to keep our feet moving on the way to the gym.  As kids we lie in bed and ‘watch the movie’ of the game-winning catch or being at the center of the big awards ceremony…. over and over and over.

Practicing “imagination plus emotion” also helps build emotional intelligence and strengthen empathy.  That’s pretty easy to practice with your kids.  After all, as you move through the day together you encounter dozens of situations that allow you to ask “how do you think that person is feeling right now?”  This can lead to some great conversations about news stories, neighborhood relations, manners, sports score…  It’s a way to take almost any conversation with your kids beyond the “headline level.”

Besides, the best way to learn something is to teach it.  Practicing visualization skills with your kids could save you a lot of time at seminars and move you closer to your personal goals.

Having trouble keeping that inner voice positive?  Watch this space for a new book about taming your Inner Critic!

I’m a big fan of taking something that works well in one arena and trying it out in another.

Literacy advocate Esther Jantzen suggests that Think-Aloud is a great way to engage our kids’ thought process during story time, thereby supporting the growth of both their literacy and critical thinking skills. (You can go back and read that post here.)

What if Think-Aloud could be applied to improving and enhancing social and emotional literacy skills? What if we help our kids to ‘Share Our Supposes’ about things that we see on the news, at the mall or in our neighborhoods?

It’s a simple something that can be easily added to day-to-day routines: just stop occasionally to share your thoughts and feelings about what you observed together… and ask your child to do the same. When we do this our youngsters get to see and feel that talking about what’s going on in the world around is us a way to understand it better. It can also help them to connect to news stories and appreciate the ways that their own lives could be impacted by similar circumstances. I think that the ability to see things from another’s point of view is possibly more important now than it has ever been.

How do you talk about the news without scaring or overwhelming your kids?

When an event reminds you of a personal experience, stop and briefly talk about it. You might make a connection between what happened to you and what is happening on the news, or about the impact that a similar event might have had on you or someone you know.

Or, when you come across a story or event that puzzles you, stop and ask questions like, “I wonder why that person did that?” or “That doesn’t make any sense to me — I wonder what she was thinking?” or “Was that a good decision?”

Don’t be in a hurry — see if your child wants to add something. Listen carefully. Encourage your child’s observations.

While you may not come up with any big answers, you’ll help impart the value of asking questions AND contribute to your child’s sense of community and connection.

I was driving my son to school the other morning when it was still dark outside. The car in front of us had two small TV screens that were playing what looked like Spongebob Squarepants outwitting a rogue amoeba. I wondered why kids needed to watch TV shows during seemingly short car rides.

When my son was younger, I recall occupying car time with thrilling stories on CD’s, singing, or silly games like “I Spy”, “The Alphabet Game” or “Name the States”. The older my son got, and with no distractions in the car, the more “quality conversations” we had. Many of them were simply priceless opportunities to render teaching and to bond.

Yesterday, my family was dining at a casual restaurant. In the booth across from us was a toddler about age three. He ate some dinner, but mostly played on his mom’s iPhone while his parents conversed. I felt concerned. Not only was this child not interacting with his parents, he was occupied by handheld electronics for nearly 90 minutes. The story repeats itself with kids on airplanes as well. I rarely see them curled up with books. It seems to me like it’s the norm that kids are allowed to occupy themselves with nonstop game playing!

What happened to books, crayons, coloring, or puzzles, to name a few intellectual activities for kids? Now for all I know, that toddler could have been playing some intellectual learning games on the iPhone and learning his ABC’s, but the whole idea of lengthy electronic stimulation just bothered me. Is this new way that the younger generation is choosing to occupy children? How much is too much? What effect will it have? And the worst question of all… are handheld electronics the new “babysitter”?

As a Parent and Emotional Intelligence Coach, I know that the more kids interact with electronic objects, the lower their people skills and emotional intelligence. The long term effects of this can hurt their future.

Why? Because kids with lower EI (Emotional Intelligence) have been shown to be less happy and less successful as adults. We all have emotions that fuel our thoughts and behaviors. Kids can feel emotions while with electronics, but they will not learn how to acknowledge them, find internal skills to manage them, or overcome them. For these vital skills they must interact with engaging real life people and situations. The more the better!

I suddenly felt old, wishing that the ways in which I raised my son would be worthwhile to a new generation. Though electronics are vital in our world, I still believe that less is more for our youth.

I realize that I must respect a new generation of mindsets not to mention technology… one day I’ll have a daughter in law and I’ll need to understand and respect the way she might be thinking. Keeping the peace would be vital if I want to “keep” my son and his happy family!

Would any one like to start enlightening me how the current generation uses both old fashioned methods and new technology for kids? I’d love to know.

Keyuri Joshi (pronounced Kay-yuri Joe-she) is an Atlanta-based Parenting Coach and author of the On The Ball Parent blog. She is not old and, so far, does not appear to be a fuddy duddy.